What happened to the markets in April?

Who would have thought that amongst all the commentary declaring a cooling property market that Australia’s record residential sale was made by Ray White Double Bay agent Elliott Placks for nearly $80million? The sale to a local purchaser of four harbourside properties in Vaucluse by three different owners was indeed a remarkable event.

And then to be greeted with our April sales result of $3.7billion which represented an increase on our figures April 2015 – a month when the Australasian property market was widely considered to have been at its peak. Within our overall results, New Zealand achieved another personal best to back up its March result with $802million.

It wasn’t only New Zealand achieving impressive results, with strong bounce back in many markets including Queensland, New South Wales and Victoria all recording stronger results than this time last year.

The reality is our market remains incredibly resilient despite talk of a market downturn. If stock levels had not declined, especially in the Sydney market, then the result may have been even more significant.

Alongside our strong figures for April is our current Net Promoter Score for the month at 83 – well above our long term average score of 77 for the year and a testament to the dedication of our members to providing customer excellence.

There was also much discussion in Australia on the retreat by the ‘big four’ banks in the financing of foreign investors. Over 130 Sydney apartments marketed and sold by the Ray White Projects team 12 months ago in Sydney, settled in April, including the 25% of sales that were made to foreign investors. Certainly an area to closely watch, but to date we have not seen any problems.

Loan Market saw over $1 billion worth of lodgements in April, with over $600 million settled. Victoria and NSW led the way with $186 million and $185 million respectively in settlements.

And all of this in a month, when an Australian federal election was announced for July. Federal elections have been a perennial dampener of real estate activity. Although with the decision of the RBA to cut interest rates to 1.75% amid speculation that this is the first of at least two cuts, perhaps we will see a more sustained level of activity in May.

With the upcoming Australian federal election in mind, and the possibility of a new Government abolishing current negative gearing and capital gains tax discount , Ray White has joined forces with real estate institutes and a large number of real estate groups across the country to endeavour to educate our clients on the potential effects of such potential changes to the property market and property prices. 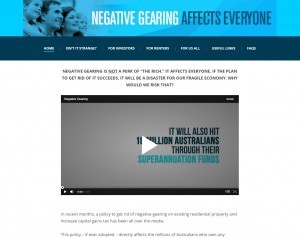 The website www.negativegearingaffectseveryone.com is a hub of facts and information which will be updated with materials and the latest news over the course of the election. We hope to spread the message to our members and their clients to ensure that the property market and the property industry remains strong.

We are excited to announce that the Ray White Group has been named as a finalist for the upcoming REB Network awards to be held in June. Ray White has been named a finalist for Network of The Year and Innovator of The Year in our maiden year as part of these industry awards. We congratulate all our members across the group who have also been recognised as finalists for the individual awards, and we look forward to a successful evening.

We’re thrilled to see 18 Loan Market finalists in the running to take out the stated-based MFAA Excellence Awards – the most we’ve ever had. Ceremonies run throughout May and already we have a winner. Mark Winter in Queensland was named the MFAA Community Champion and will go into the pool to take out the national title in July. We hope for more good news as the state ceremonies continue, and we congratulate all our finalists for their achievement.

New dedicated Ray White Marine offices will soon open in every state, with selected Ray White property offices throughout the Group adding Marine as an optional value add service to their clients.

Ray White Rural agent Peter Douglas has secured a spectacular listing in Emu Park, a one of a kind property sitting high above a hill and overlooking the crystal clear reef, with the two lots expected to sell for a record price in Central Queensland.

Finally, Ray White Victoria CEO Domenic Belfiore has been working hard this year to secure a number of new offices and grow the strength of our brand in Victoria. Six new offices will have opened their doors in the first six months of 2016 – including Coburg and Benalla (who have opened this month), Howlong, Preston, Romsey and Burwood – and with a strong pipeline this number is expected to double by the end of the year.

We also welcome all our new offices who have opened this month, including Kurrajong and Wentworthville in NSW and Pegasus in Rangiora in New Zealand.